Our Internship Program Is On-Trend

At Edlong, we’ve long cherished our role in inspiring the future leaders of the food industry. That’s one reason why our internship program is so special to us. 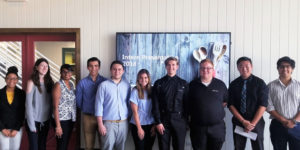 This year, we tasked our summer interns with working within a current trend—the growth of dairy-free and vegan products. They were asked to create a real product, using Edlong flavors, that addressed this trend in a unique and creative way. The interns decided that they wanted to bring indulgence to vegan, so they created a vegan whipped topping. Working collectively, our team of interns made a topping of soy milk and pea protein. They then used what they had learned about the versatility and authenticity of Edlong flavors to create multiple versions of the vegan topping—from chocolate gouda to strawberry cheesecake to even goat cheese. As the interns said in their presentation to Edlong leadership, “Everybody loves dessert!”

Thank you to our interns for all your efforts this summer! We can’t wait to see what you do next. Good luck!